With Vrachtfiets I started at 2009 together with a friend (Onno Sminia) a company for delevoping and producing electric cargobikes. We started in the last years of our university (TUDelft) and continued to improve the design of the bike the years after. We did many smaller and bigger projects such as a rental service at IKEA, a parcel delivery with the municipality of Delft, a local food delivery company in Brussels and many many more. This article covers my story with Vrachtfiets.

Our vision was simple:

When a typical new student decides to live in Delft he or she will go to the IKEA to buy some furniture, and typically this involves purchasing a new bed and / or a Billy couch. What happens next is that the parents get a call, who are living on the other side of the country probably, to haul the Billy-couch 2 kilometres from the IKEA to the student room of their beloved child. This has a practical reason. As a Dutch Student you are likely to miss one or more of these: a car, a trailer and or a driver's licence.

Being dependant on your parents contradicts with the obtained freedom as a young student and it is not environmental friendly eather. Furthermore the location of IKEA Delft is at close cycling distance from the university campus and student housing facilities. With this in mind Onno and I came up with a solution of an old idea in a modern package: an electric cargobike called Vrachtfiets.

We desided to engineer the cargobike that would be big enough to transport a couch or a small bed, it should be electric, and it should feature two driver seats so you could transport stuff from A to B with a friend. This seemed to be a practical, yet fun, and environmental friendly solution!

At first we engineered a prototype which we presented at the university. With the help of the marketing department of the TUDelft and the municupality of Delft our showcase gained a lot of free media attention. Eventhough the prototype wasn't close to a real product it paved us the way to get in touch with IKEA's higher management. Quite soon after we were able to sell two bikes for a rental service at the IKEA.

The Vrachtfiets became a well known thing amoung students. Often when I walked through the city I would see IKEA's Vrachtfiets with two students rushing from the IKEA to their new places. Yes it worked!

The months after felt like a snowball effect. The snowball was still somewhat fragile at the beginning, but it was rolling. We got more media attention and with that we also got calls from people who had new ideas of using a Vrachtfiets for their own business.

So that is what we did. We created new versions with our modular design. A big electric cargobike with different "modules" on top. Pictures below show a version for a afterday care.

A Vrachtfiets for a after day care

The biggest cargo bikes of the world

Municipalities are nowadays keen on getting "tourist-friendly" city centres. This basically means reducing car movements. It makes sense for cities doing so because becomming more attractive to tourists and residents results in an economic boost.

Especially older cities are small and not "designed" for heavy car or truck usage. Here it is benificial to use small and sustainable transportation solutions. I personally believe that this also the case for modern cities, or more precise: dense city-hubs. These areas are very much like the old Dutch cities, where you don't need a car since everything is within the reach of 10 minutes: 10 minutes by foot, 10 minutes by bike or 10 minutes by public transport.

In a nutshell, the municipality of Delft wanted to see what kind of regulations they could implement by researching smaller and more sustainable alternatives. For this Onno and I helped with that research by building and analyzing two electric Vrachtfietsen for parcel delivery. 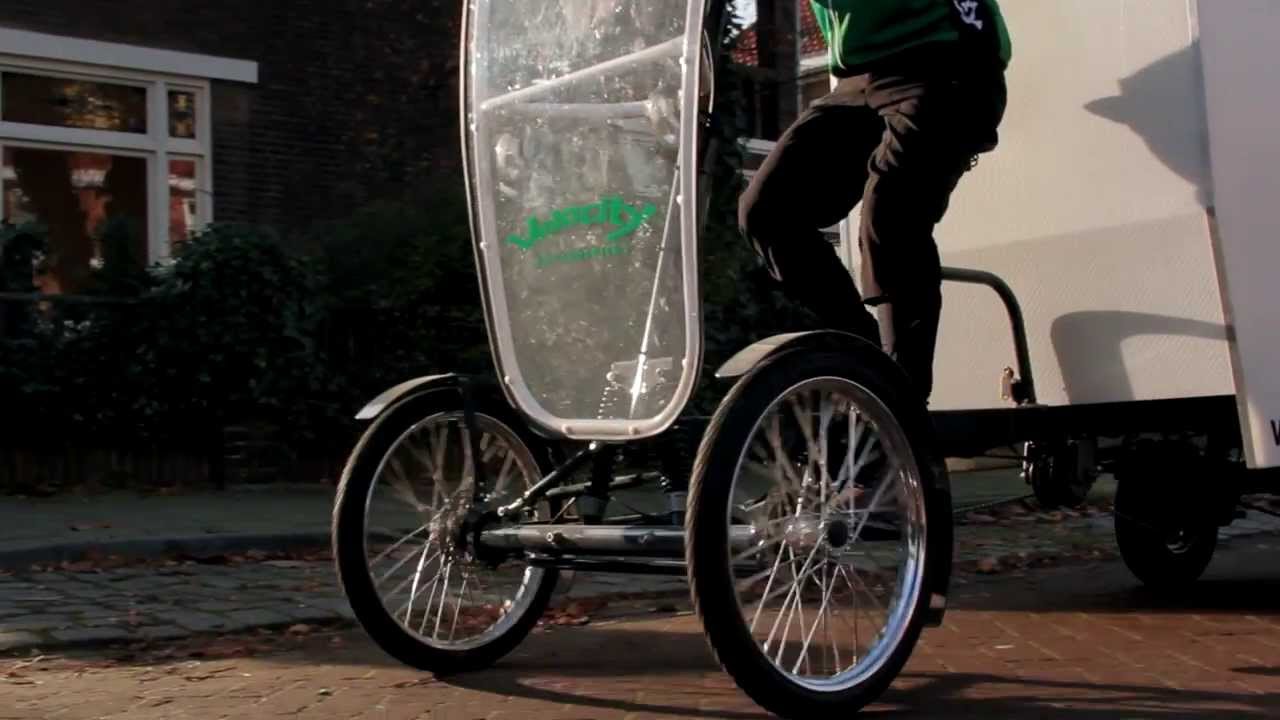 Velocity (opens new window) is a bicycle messenger company in Nijmegen in The Netherlands that delivers biologically produced vegetables to people's home by Vrachtfiets.

It was cool to see that our message crossed borders. Our new friends L'heureux nouveaux (opens new window) in Brussels work in an ecofriendly, a fun and smart-marketing way! They deliver locally produced goods to their customers on a subscription based model.

With Vieco we did a project for a Dutch ministry of economic affairs, named Agentschap NL (nowadays called RVO). It was a "small business research development" assignment. The goal was to see if and how we could implement a "Vrachtfiets like" product for the last mile. The last mile issue is an idea that people use their car instead of the train because of the inconvenience of last mile. We researched this in more particular for (day) tourism.

a Vieco at camping Bakkum

For this we engineered, fabricated and tested a batch of four wheeled electric cargo bikes that could be rented near a train station to transport you and your family with luggage from the train to the holliday park / beach.

It was lots of fun !

After spending 4 years engineering cargo bikes and entrepreneurship I learned a lot. It was a fun, exciting and sometimes difficult period. From a distance however the Vrachtfiets looks like a simple and elegant solution. It really has its own charm. But if you do it for 4 years you also see issues that block the company's ability to grow. Some of those issues felt inherent to the basic idea of a big electric cargo bike. Finally I decided to quit. Onno did as well.

It was time for me to go to the next challenge 😉